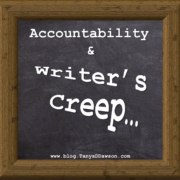 I’d like to say writer’s creep happens especially when the writer is new. I’d like to wave my arm magnanimously and say there-there to myself. And while life happens, my progress wasn’t. When I heard the term creep, normally a project management reference, applied to my writing, I stopped in my tracks. Crapola! I had writer’s creep.

To be real, I was aware I needed traction. I admit being in editing denial with my improvements and continual tweaks. Still, I knew I needed help. But what kind?

I thought back to the beginning and working with my English major friend. As soon as I had a chapter done I would email it to her for editing. She would ping me for the next and then the next until there were no more chapters. (No, I will not say how long ago we shared that dance.)

Right about then, if I’m honest, writer’s creep crept in. Each time I learned of another grammar rule I would go through the entire manuscript to repair it. Over and over I did this. I kept learning more. I read writing blogs and books, and learned more. Others read and offered suggestions and I received more input.

Then, schtuff came together: unraveled denial, the need for accountability, and intuitive nudges.

Three weeks later―following a suitable period of analysis paralysis―I asked a respected friend and successful business person to be my accountability sponsor. Why sponsor? Because, while my situation may not have warranted an intervention (or did it?), I needed to get out of my own way. He gently called me on it: writer’s creep.

The brilliant, bright, dawning light of understanding rose. Having worked along software developers and engineers of all sorts, I had seen project management timelines slide embarrassingly week after week on the big screen at all-hands meetings. Popularly known as project or scope creep, I had it—in my case, writer’s creep.

Luckily, blessedly, or que-bueno-ly, my accountability sponsor is also an excellent coach and mentor who genuinely wants to see Andersen Light published. There is now a Dropbox dedicated to my writing work. I am dusting off my query letter and other submission documentation and moving forward. Creep, schmeep.

Fiction writer and author, Tanya D. Dawson, has written a story for the young adult in all of us. Her pending novel, Andersen Light: A Mystic Creek Novel [working title], is an atypical tale set in our everyday reality alongside an unknown world of extraordinary others. This becoming-who-you-are adventure breathes fresh air and light into the world of YA fiction, without giving up the angst or the weird. While Andersen Light is primarily set the fictional town of Mystic Creek, Oregon, Tanya lives and works in the American Southwest.